The boat of the shipowners Pepequín Orbaneja and Juan Luis Paez has won all three tests and have resolved the Sunday appointment, since the lack of wind made sailing on Saturday imposible. Even on sunday the wind has been very generous but sufficient to validate the championship and keep adding to the imminent final circuit organized by the NC Bevelle. And it is that the three goals of the monotype CN Sevilla allow them not only to gain the champion title of Andalusia if not improve its leadership in the circuit in the remaining last circuit to the end. 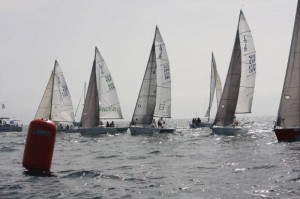 The crew that has achieved the target set this weekend was formed by Juan Luis Páez, owner and helmsman, accompanied by Quique Gómez, Felipe Parejo and Jose Luis Domecq, the latter winner for the second consecutive year as in the previous edition manned in the Puerto Sherry III monotype, until now regional champion.

The Da Bruno ship was accompanied in the drawer of the winners by the ships Trocaderoarena.com of Iñaki Castañer, with the same regularity as the winner to sign the three 2nd place on this day, and Laude San Pedro International College of Ricardo Zabell, 4th, 4th and 5th.

At the gates of the podium today a team that stood out among the main favorites, the Abmys of Arnaldo Brito, who is just two points behind third after going from less to more with a 6th, a 5th and 4th, and solve his side a draw on points with Gestaviviendas of John Bassadonne fifth with a 3rd and two 6th place.

Very close to just two points the Puerto Sotogrande Miguel Angel Diaz and Gonzalo Perez de Guzman (5th, 7th and 8th), followed with three more by the PAS Team Federico Caine and Nacho Alcina, whom an offline is classified the first test will not let them look over the two 3rd scored in the following sleeves. The Alcina settle for seventh place, followed by Guillermo Olaso Trocadero Sotogrande, the team of Tomás Puerta, the DIPS Project Management of Rafael Fortes, the Royal Gibraltar Yacht Club of Paul Stagnetto and Tony Segovia, the boat of Puerto Sherry at number thirteen the FRS Iberia Moritz Bruns.

The next appointment for the Andalusian J80 fleet will be next Saturday, May 30th.

GELATO A CULTURAL ISSUE TO ...

When you visit any corner of the "Bella Italia", you cannot miss the opportunity to enjoy a real gelato while walking. The authentic Italian gelato is an institution, it is part of the ...

THE ESSENCE OF ITALY IS ALSO ...

The wind in the face, enjoying the most diverse corners, always with the water, beaches and nature in our horizons, is very much the Mediterranean lifestyle. Always with the sun accompanying us. ...